“Often the hands will solve a mystery
that the intellect has struggled
with in vain.”
CG Jung

“…the simplicity and depth of Sandplay provides a space for contact with the inner, symbolic world. A basic premise of Sandplay is that psyche possesses a natural tendency to heal itself, given the proper conditions. Similar to our physical wounds that heal under beneficial conditions, the psyche has an instinctual wisdom that emerges when able to operate naturally.

Sandplay is “hands on” psychological work, and is an adjunct to talk therapy. It is a powerful therapeutic method that facilitates the pysche’s natural capacity for healing.

In a “free and protected” space provided by a trained sandplay therapist, the client creates a concrete manifestation from his or her imagination using sand, water, and miniature objects. In this way Sandplay helps honour and illuminate the client’s internal symbolic world, providing a place for its expression within a safe container.

With sufficient time and understanding, a sandplay experience can lead the client into layers of experience that are pre-verbal and long forgotten to the conscious mind. Through the tangible emergence of personal and archetypal symbols in the tray in a safe environment, the client moves toward a sense of balance and wholeness.” 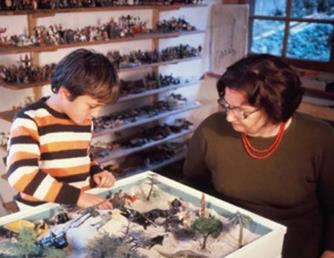 Sandplay Therapy is based on the depth Psychology of C.G. Jung and uses similar equipment to that used in the ‘World Technique’ originated by Margaret Lowenfeld, an innovative paediatrician and founder of one of the first psychological clinics for children in England in 1928.

Dora Kalff devised a unique method of using sand, water, trays and miniatures in what she and other professionals called Sandspeil, or in English Sandplay Therapy.    Her method was distinctly different from the way others used similar equipment.

The method, using a tray filled with sand and miniatures allowed the free representation of inner psychological contents in the creation of a three dimensional image.  She incorporated Jungian Psychology in a manner now validated by contemporary neuroscience.

Dora Kalff’s intensive interest and studies of Eastern philosophy, in particular Zen Buddhism, Tibetan Buddhism and Taoism contributed to a deepening of vision and understanding of both the creations in the sand as well as the therapeutic attitude of the therapist. Her book Sandplay: A Psychotherapeutic Approach to the Psyche, first published in 1966, gives a good introduction to her method mainly focusing on the Therapy of children. The power and efficacy of Kalff’s method became recognised globally, and she travelled to teach Sandplay Therapy in Europe, America and Japan.

In the 80’s she initiated yearly meetings of a selection of psychotherapists and advanced students of Sandplay from Switzerland and other countries where she had taught Sandplay.

With time there arose a need to provide a more formal structure for the study and practice of Sandplay Therapy to ensure proper standards and ethical practice. To meet this need, the international group which was gathering regularly at her home in Zollikon, Zurich established with Dora Kalff the International Society for Sandplay Therapy on August 13, 1985.